We have again entered a team in the Queenstown Social Ice Hockey league, played on a Sunday night at the Queenstown Ice Arena. Unfortunately, the original NZSHRED Hockey jerseys have become a 'collectors item' (akin to a signed version of the Bible) over the last two seasons, with just 8 units still left in existence in the world. Subsequently, this season we will be playing under the NZSHRED "Shredders" name, however will be in a purple kit. Fingers crossed, we will produce a new strip for 2015. So, come on down and supported the crew as we skate around, try to keep upright and perhaps, with some biblical intervention, get the puck in the net once or twice. NZSHRED have teamed up with Hamills restuarant in the Remarkables Park Shopping Complex, to sponsor a mixed Indoor Volleyball team in the Winter Social Competition, run by Lakes Leisure out at the Queenstown Events Centre.

You'll see little Shredders running around each Wednesday evening. If you'd like to join in, just grab someone from the Team or pop in to NZSHRED to enquire. 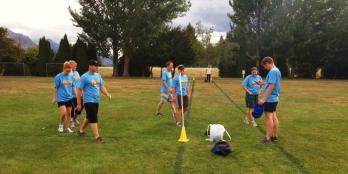 Over the 2011/2012 summer season, NZSHRED again teamed up with Hamills, to sponsor a Touch Rugby team. The competition is run by Touch Southland and our Team features in the Mix Social Grade, played on the fields at Queenstown Events Centre.

I'm sure we'll be running around again next summer, so pop in and see us in store if you'd like to join the Team.